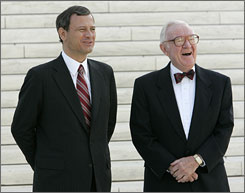 WSJ Law Blog carries a series of excerpts from a lengthy NY Times Magazine profile ($) of Justice John Paul Stevens, the senior Justice on the Supreme Court and by any commonly used standard the leader of the Court’s liberal wing. Some of the key excerpts:

“I don’t think of myself as a liberal at all,” he told me during a recent interview in his chambers, laughing and shaking his head. “I think as part of my general politics, I’m pretty darn conservative.” Stevens said that his views haven’t changed since 1975, when as a moderate Republican he was appointed by President Gerald Ford to the Supreme Court. Stevens’s judicial hero is Potter Stewart, the Republican centrist, whom Stevens has said he admires more than all of the other justices with whom he has served. He considers himself a “judicial conservative,” he said, and only appears liberal today because he has been surrounded by increasingly conservative colleagues.

[H]e emphasized that he still thinks of himself as a judicial conservative, which he defined as someone who tries to follow precedents and “who submerges his or her own views of sound policy to respect those decisions by the people who have authority to make them.”

“Originalism is perfectly sensible. I always try to figure out what the original intent was, but to say that’s the Bible and nothing else counts seems to me quite wrong.”

Up to a point, Justice Stevens is framing his view of the Court’s job in terms similar to those commonly used by Justice Scalia or by Chief Justice Roberts to describe their judicial philosophies, and he’s self-identifying as a “judicial conservative.” Now, you can take this, if you like, as so much disingenuousness in light of his record, but I think it’s also a powerful tribute to how far conservatives in general and Justice Scalia in particular have shifted the landscape in how people within and outside of the Court perceive its role and mission that even Justice Stevens finds it desirable that he be perceived as engaging in the same sort of project, and disagreeing mainly at the margins of what constitutes “judicial conservatism.” Just as was true when Bill Clinton declared that “the era of big government is over,” the moment your opponents start cloaking themselves in your philosophical garb, you know you are winning the battle of ideas. It also means that nostalgia for the old order (H/T) is simply the lament of the losing side in that battle.
Relatedly, Tom Goldstein, who is certainly no conservative himself but is a careful observer of the Supreme Court, has a thought-provoking post on the political implications of the upcoming Term. Among other things, he predicts a victory for Guantanamo detainees in their pursuit of access to federal courts, and notes that whichever way the DC gun ban case comes out, it’s likely to mobilize the Right more than the Left. His analysis is worth considering:

Because the public’s interest in the Court is notoriously weak and its memory short, the relevant question in deciding whether the Court can be a mobilizing force in the 2008 election for ideological groups is therefore not “how were cases decided in OT2006” (the focus of commentary so far), but instead “how will OT2007’s cases be decided?” And I think that the existing and anticipated docket strongly suggests that, during OT2007, the outcomes of the highest-profile cases will be perceived as quite liberal.
As a consequence, I think it is exceptionally unlikely that next Term will end as this one did, with front-page stories and reports leading the evening news describing the Court as profoundly conservative, with laudatory commentary by the right and howls of protest from the left. Instead, we will see (mistaken) talk of the “surprising” tack by the Court back to the left and (among the legal glitterati) the “good Kennedy, bad Kennedy” phenomenon in which his ideological views seemingly oscillate dramatically from Term to Term. In fact, this commentary will be wrong: the Justices and their views will be exactly the same come June 2008; it is the cases that will be different.
Equally or more important when considering the potential electoral consequences of the Term, the leading cases will be ones in which the more liberal position is distinctly – even profoundly – unpopular with conservatives, creating the prospect that the Court will serve as a rallying cry to mobilize the electorate. Even if the left ultimately does not win all of the five most significant cases of this Supreme Court Term, that wing of the Court will carry the banner for accused terrorists, crack dealers, child pornographers, child rapists, and those who want to forbid gun possession.

In particular, conservatives in 2008 could use the five cases cited above to articulate a very coherent theme of “law and order” and “victims rights” around the need to move the Court one further step to the right. Each of the cases – terrorism, drug sentencing, child pornography, the death penalty, and gun rights – fits within that framework.